Greyhound Gap was formed by Lisa Cartwright in August 2003, became a Registered Charity in March 2006 and a Charitable Incorporated Organisation in September 2014.   Lisa describes in her own words how Greyhound Gap was given life.

"I had spent a considerable amount of time volunteering within a rescue environment - among other things, arranging and carrying out home checks and generally liaising between the rescue and the potential adopters. Over this period of time the cloudy beginnings of an idea started forming in my mind: there was something missing within the rescue world, a gap I could not quite put my finger on. This was completely understandable, as the rescue world is very busy and often fraught. My mind was not capable of finding the time for the idea to settle.

Since leaving the organisation that I was volunteering for, that cloudy image suddenly came into sharp focus. It was that the rescues themselves didn't always have the time and resources to liaise with each other. Often, when answering the phones, potential home offers came in from outside of the catchment area and unfortunately there were no volunteers in place to cover these areas. It is so hard to find volunteers and rescues are always operating at full stretch. They simply do not have the time to go searching for the nearest rescue to the potential adopters or physically don't know which it is as there are so many smaller independent organisations who have no access to the web and are therefore often unknown

The original aim of Greyhound Gap's website was to provide just that service. On our forum you will find a list of members willing to help in various ways. We hoped, and succeed to this day, to help rescues co-ordinate this aspect by acting as a "middleman" where needed. There are many dog owners the length and breadth of the country who just do not have the time to offer help to one set rescue as they feel obliged to keep giving more and more. Greyhound Gap provides an independent resource of freelance volunteers who can help as and when required in their area.

We also hoped, that by forming a better working relationship with rescues around the country we may at times be able to get "death row" greyhounds to a place of safety prior to rehoming to their forever homes. Over the years we have helped to save many dogs (not just greyhounds and lurchers) from being put to sleep through liaising with many breed and non-breed specific rescues. However, without support that kind of action is impossible.

Another of Greyhound Gap's aims has always been to promote and highlight the plight of older dogs who, having come into rescue in their twilight years, struggle to find a sofa of their own on which to end their days" 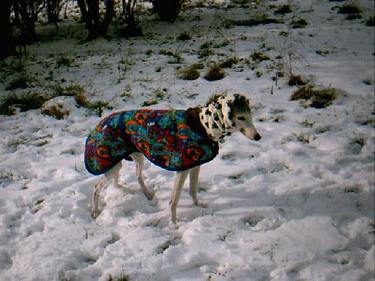 In January 2003 Lisa adopted a 13 year old greyhound called Maisy. Lisa wrote this at the time:

"Maisy had spent her life in a shed and the fact that this is her first home at that grand age is a tragedy. She loves her life now but she deserved so much more over the last years. Given her age I don't know how much longer Maisy will be with us but I hope that by giving her the happiness she has here, for however long, it will erase the past. Older dogs have minimal requirements and yet so much love to add to your home. If you have that dog for a week, a month, a year, remember they will leave for the bridge knowing the love and warmth of a home."

Sadly Maisy left for the bridge just shy of her 15th Birthday. The love and joy she gave to Lisa's family in that short period of time is second to none. They all deserve this chance.

Greyhound Gap has grown and evolved substantially from that first vision but we have always retained our core values continuing to support and work alongside other rescue organisations throughout the country.  With this extended network Greyhound Gap has a hand in helping some 200-250 dogs a year. We are responsible for successfully rehoming around 150 dogs ourselves each year and the assistance of safe placements for many others into mutually reputable organisations.

This site uses cookies to personalise content and adverts, to provide social media features and to analyse traffic.